Paul Kurtz, the father of secular humanism, is another atheist failure without a legacy

Is Paul Kurtz another atheist failure without a legacy?

I previously did an article on the atheist failure Farrell Till who is headed for leaving no legacy. In addition, I showed that Richard Dawkins and other major atheist and/or evolutionist websites have lost significant traffic in recent years.

I would encourage to read these articles at:

Paul Kurtz, who is "the father of secular humanism", appears to be destined for obscurity as well.

Dr. Paul Kurtz appears to have been forced to resign from an main organization  that he founded which was the Center for Inquiry.  Dr. Kurtz described this humiliating event as a "shattering blow" in a Buffalo News article entitled Redirecting a long life of godlessness.  The infighting among the organization appeared to be a power struggle between the New Atheist (militant atheist) and the non-New Atheist factions of his organization.

On October 10, 2010, a contentious exchange between members of the Secular Humanism faction of atheism founded by Paul Kurtz and the atheist Ron Lindsay was caught on tape.Video - Part one and Video - Part 2

Below is the web traffic of the Center for Inquiry according to Compete.com - unique visitors per month

Below is the web traffic graph of Paul Kurtz's current main website according to Alexa: 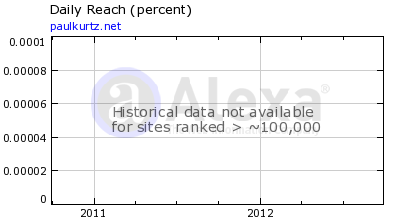 Also, according to Compete.com Paul Kurtz's website receives about 600 visitors a month as of 3/2012 as can be seen below (click the graph below):

PZ Myers proves Paul Kurtz, the father of secular humanism, was another atheist failure without a legacy

Paul Kurtz, the father of secular humanism, is shown a lack of respect by the Secular Web. Paul Kurtz: Another atheist without a legacy