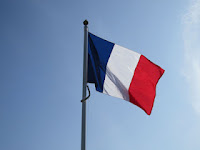 
French scholars say, evangelicalism is likely the fastest-growing religion in France – defying all stereotypes about Europe’s most secular nation...

Daniel Liechti, vice-president of the French National Evangelical Council, found that since 1970, a new evangelical church has opened in France every 10 days. The number of churches increased from 769 to 2,068 last year.

We look forward to expanding our current efforts in terms of reaching French people with the Question Evolution! Campaign and 15 questions for evolutionists. We may help them with general internet evangelism efforts as well.

Currently, we have one volunteer translator who lives in Switzerland, but we hope to gain others in August or September. In addition, it would be great if we could help cause Bible believing churches to be the fastest growing religion the UK. If it can be done in a country like France, it can be done in the UK.

For hundreds of years atheistic French intellectuals proclaimed the end of Christianity in France. One thing I have learned is that atheist pride and complacency is no match for Christianity.

It certainly appears as if evolutionism could be headed for the guillotine in France - especially if it is aided by French and European debt crises which jar people's atheism/agnosticism, general spiritual complacency and various other errant belief systems. People's belief systems often do change during a crisis as change is forced upon them.

France is currently burdened with an enormous amount of debt and investors are questioning whether or not they will be able to pay it all back. In addition, Reuters just reported "French economy stumbles as business morale dips".

Immigrant evangelical churches are a fast growing movement in France

Refuting evolution
Posted by 15 questions for evolutionists at 1:23 PM