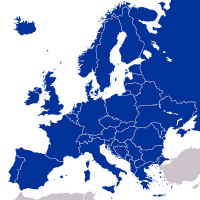 1. Will future European immigration pour creationists into Europe? If so, how large will the effect be?

2. How can the Question Evolution! Campaign best capitalize on past and future European immigration in order to most rapidly dissemination the 15 questions for evolutionists and other initiatives into Europe.

3. Should internet evangelism be combined with creationism evangelism in Europe in order to best optimize the number of Bible believing Christians in Europe?

European immigration and its effect on Bible believing Christianity in Europe

The Birkbeck College, University of London professor Eric Kauffmann using a multitude of demographic studies argues in an academic paper entitled Shall the Righteous Inherit the Earth? Demography and Politics in the Twenty-First Century the decline of atheism in terms of its global adherents is an established trend that will persist for the foreseeable future and the rate of decline will accelerate.

Will the global decline of atheism affect the Western World? Yes, it will.  Kaufmann declared to a secular audience in a lecture titled Shall the religious inherit the earth: "The trends that are happening worldwide inevitably in an age of globalization are going to affect us."


...a major source of conservative religious growth in Europe is immigration.
The main flows involve Muslims, from the Middle East (especially North Africa) and
South Asia, and Christians, largely hailing from Africa, parts of Asia, Latin America and the West Indies. West Europe’s population of non-European extraction is projected to triple between now and 2050, from roughly 4-5 percent to 12-15 percent, reaching as high as 25 percent in societies like Holland, France and Britain. (Coleman 2006) Few of these newcomers will be secular. Perhaps 60 percent will be Muslim, who, as we shall see, show few signs of secularisation. (Jackson, Howe et al. 2008: 123) But religious immigration goes beyond Islam to encompass Christianity, which is reaping a demographic dividend nearly as impressive. In England, more Muslims attend mosque on a weekly basis than Anglicans attend church, but Christianity is hardly stagnant: 58 percent of London’s practicing Christians are nonwhite. (Islamonline 2005) The Global South is today’s engine of world Christianity, symbolized by the appointment of Ugandan-born John Sentamu as Anglican Archbishop of York in 2005. At the epicenter of global southern Christianity stands Pentecostalism, its most exuberant, fast-growing form. A quarter of the world’s Christians are now believed to be Pentecostals, with most of the past half-century’s growth taking place through conversion among Catholics in Latin America, Animists in Africa and Buddhists or secularists in East Asia. (Jenkins 2007; (Martin 2001; World Christian Database 2008).

The urban church is essentially an immigrant church in Britain, but this is also
becoming true elsewhere in Europe. In France, evangelical Protestants have swelled from 50 to 400 thousand inside 50 years, chiefly because of immigration. Even Catholicism and mainline Protestantism benefit... In Europe as a whole (including Russia), pentecostals and charismatics have exploded in numbers, expanding in step with Islam. Currently there are more evangelical Christians than Muslims in Europe. (Jenkins 2007: 75) In Eastern Europe, as outside the western world, Pentecostalism is a sociological and not a demographic phenomenon. In Western Europe, by contrast, demography is central to evangelicalism’s growth, especially in urban areas. Alas, immigration brings two foreign imports, Islam and Christianity, to secular Europe.

The combined impact of native religious fertility and religious immigration will
be to re-sacralise Europe. Its seemingly inevitable march toward secularism may one day come to be seen as an interregnum between its historic piety and multi-faith future. Projections which combine data on immigration, age structure, religious switching and fertility are instructive. We have performed these unprecedented analyses on several cases. Austria offers us a window into what the future holds. Its census question on religious affiliation permits us to perform cohort component projections, which show the secular population plateauing by 2050, or as early as 2021 if secularism fails to attract lapsed Christians and new Muslim immigrants at the same rate as it has in the past. (Goujon, Skirbekk et al. 2006)...

Overall, religious-secular fertility differences and a slowing of Christian secularisation mean that immigration will lead to a more religious western Europe over the course of the twenty first century.


In order to best understand the issue of European creationism, we recommend also reading our articles:

The future of European Darwinism and atheism is bleak

A collection of our articles on European creationism and atheism

How can the Question Evolution! Campaign best capitalize on European immigration?

To learn how the Question Evolution! campaign can best capitalize on European immigration in order to maximize the number of creationist in Europe please see our resources directly below:

Creationism is growing around the world and global atheism is shrinking

Why are the years 2012 and 2020 key years for Christian creationists and pro-lifers?