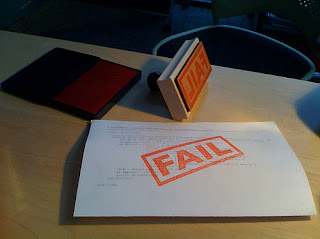 We have some exciting news concerning a key creation vs. evolution battleground area of the United States plus some additional charts to share with you.

As can be seen in the upper graphs of the Google Trends graphs below, people are showing less and less and less interest in atheism and prominent atheists in the first part of 2012 especially beginning in April:

4. Google trends for the search Richard Dawkins in 2012:

5. Web traffic for RichardDawkins.net according to Alexa.com: 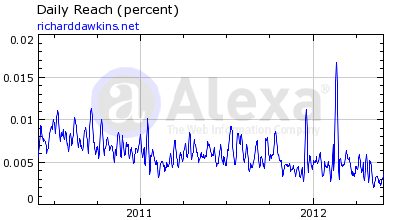 Want to see some dramatic charts showing that atheism has had a bad 5 years?

Here is some charts and information showing that atheism has had a rough patch for the past 5 years!

Decline of atheism: An established trend

Everything is big in Texas - especially grassroots anti-evolution campaigns!

Today we spoke to a key Texas opponent of Darwinism who has examined the Question Evolution! Campaign. The call went extremely well! In June of 2012, we will begin working on spreading the campaign in 3 key areas of Texas initially and then spreading the campaign throughout the state. Yippie-yi-yo-ki-yay! Move over little Texas evolutionist doggies, big ole' Question evolution! dog movin' in!

We have a list of 500 Texas churches and their contact information which we will be using in this second phase of Texas outreach.

As we indicated in an earlier post, Texas is a key state when it comes to buying science textbooks for schools because they buy so many and have a significant effect on the United States textbook market. See our previous post: Reporting on the initial phase of our Question Evolution! Campaign group's outreach for Texas

Texas Christians and Christians throughout the world, it time to run evolutionism out of your community!

Help spread the word about the Question Evolution! Campaign and its 15 questions for evolutionists and watch the decline of world interest in the shallow foolishness of Darwinism and atheism accelerate!

Cutting off the air supply of atheism