The rich Swiss and Americans are a slap in the face to Darwinists. Yodele he who! God bless America! 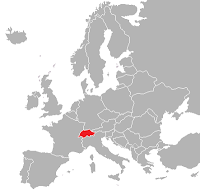 1. Evolutionists often claim that scientific achievement and its attendant benefits will end if Darwinism ends. Is this true?

2. Are wealthy Switzerland and America, which have significant Christian creationist populations, a slap in the face to Darwinists and a bucket of cold reality thrown in face of dogmatic evolutionists?

3. What are the 6 words that will stop arrogant evolutionists in their tracks?

Where are the scientific breakthroughs due to evolution? Dr Marc Kirschner, chair of the Department of Systems Biology, Harvard Medical School, stated: “In fact, over the last 100 years, almost all of biology has proceeded independent of evolution, except evolutionary biology itself. Molecular biology, biochemistry, physiology, have not taken evolution into account at all.” Dr Skell wrote, “It is our knowledge of how these organisms actually operate, not speculations about how they may have arisen millions of years ago, that is essential to doctors, veterinarians, farmers … .” Evolution actually hinders medical discovery. Then why do schools and universities teach evolution so dogmatically, stealing time from experimental biology that so benefits humankind?

Is evolution relevant or helpful to real science?

46% of Americans are young earth creationists

Evolutionists, there are wealthy and educated Swiss creationists! Yodele he who!

The pro-evolution Wikipedia was founded by an atheist and an agnostic.  According to their article on Switzerland, "Switzerland is one of the richest countries in the world by per capita gross domestic product, and has the highest wealth per adult (financial and non-financial assets) of any country in the world.  Zurich and Geneva have respectively been ranked as the cities with the second and eighth highest quality of life in the world.


According to the website Swiss.info.ch creationism is growing in Switzerland.  Specifically, the website declares:  "more Swiss are joining these movements".

Next time a Darwinist tells you that scientific advancement and its attendant benefits will end if Darwinism ends tell them you have 6 words for them: God bless America; Yodele he who!

The rich swiss continue to slap evolutionists across the face. Ouch! That must hurt!

Posted by 15 questions for evolutionists at 11:09 PM