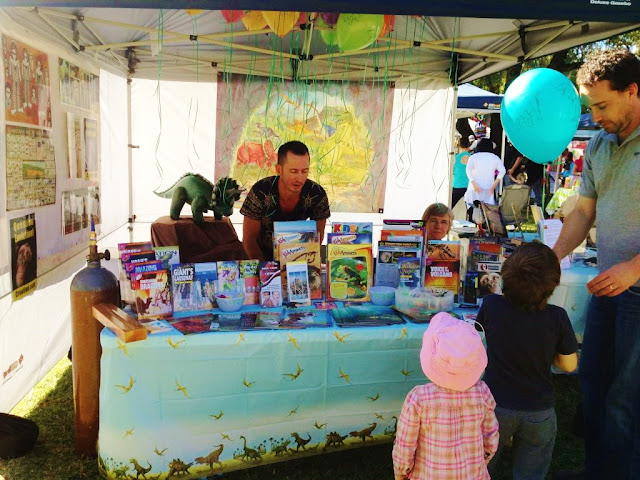 I just received an email about a successful Question Evolution! Campaign and pro-biblical creation outreach that some committed volunteers spent thousands of dollars on. Later this week, I will have even more exciting news about some events which will insure there is a lot of forward momentum in order to make 2013 be the WORST year in the history of  Darwinism. See: 2013

Below is an email and some pictures of the event plus a picture of the event is featured above (the email was slightly changed - for example, crossing out the people's names to protect their privacy).  I will be sharing more pictures in subsequent posts. In the picture above, please notice how the young man in the dark shirt is raptly focusing his attention on the Question Evolution! tract directly before him which features the 15 Questions for evolutionists.   No doubt this young man received a strong dose of  anti-Darwinism inoculation while visiting the Question Evolution! Campaign booth!

G'day Team,
Tumut NSW held their annual Festival of the Falling Leaf on the weekend. Noeline and her
daughter Virginia put a lot of time, money and effort into the stall. The dinosaur showbags
were each individually stamped about 10 times - Five dinosaurs on the front, five on the back.
They poured thousands of dollars into this and many hours.

The balloons were a huge hit - They had dinosaurs on them. Our stall was well received. A number

of people said that they would renew their Creation Magazine subscription. The dinosaur showbags
were tailored to the individuals or families. All of them contained at least one Creation magazine,
creation comic and "A Question of Origins" dvd. Of course, they were filled with an assortment of
many tracts  such as the Question Evolution! Campaign tracts.  There were also lollies, miniature
dinosaurs, etc.

One bloke just wanted anything to do with geological formations. The fossil stand created a lot
of interest also. The bloke standing with his family was a Tumut pastor. He thanked us profusely
and asked us to set up a table after his church service.  (You will see a pic of him putting his
number in my phone with a small dinosaur, using the tail.)

It really was a great stall but my words just cannot do it justice. Thank you to all who made this
possible, especially XXXXX  XXXXX, her daughter Virginia, husband Ken, Ron and Denise XXXXX for
supplying the Question of Evolution dvds, and CMI.

We'll be back next year and in the meantime, will be looking for other opportunities.

Other pictures of the Question Evolution! Campaign event 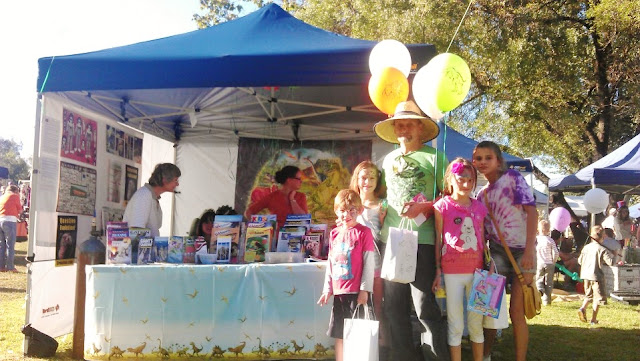 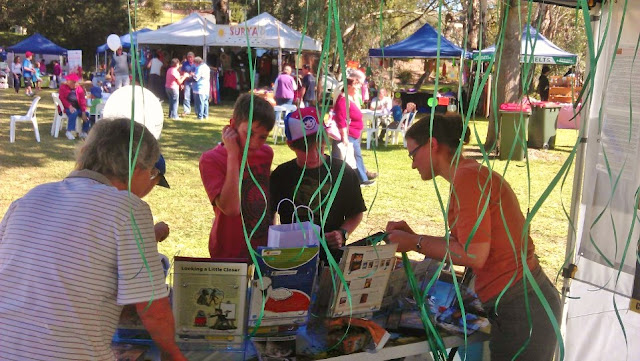 Posted by 15 questions for evolutionists at 2:36 PM